The sequence of rope production:
At its very simplest, making a rope consists of plying yarns, often by twisting, and re-twisting the plied yarns together to make substructures such as strands. These, in turn, are assembled and twisted or braided into ropes. Finally, in some ropes, an external jacket is provided, generally by braiding, but occasionally with an extruded plastic jacket or even a combination of both. The basic steps in making a rope can thus be listed as: Starting Material:
The starting materials for rope production are yarns, monofilaments, tapes or slit film. Most of the yarns used by the rope industry are multifilament yarns, which are composed of synthetic fibres in the form of continuous filaments. There is still some use of traditionally spun textile yarns, which are made by assembling short natural fibres, with some use of synthetic staple, which is converted into yarns in a manner similar to spinning natural fibre yarns.

Twisting theory & practice: Surprisingly the theory of rope manufacturing is not simple. There are a number of issues related to twisting, of which the most vexed question is that of backtwist. 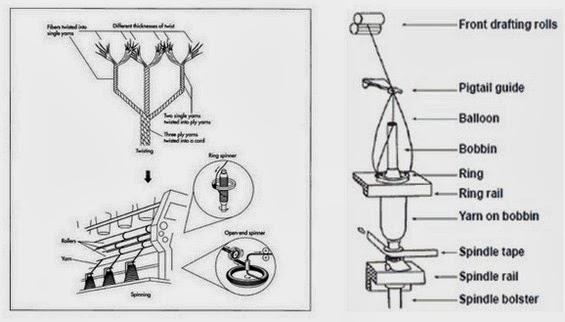 Twist can be either left handed or right handed. In the textile industry, these are referred to as S or Z twist. Most commonly, successive twisting operations alternate twist directions. Rope making involves twisting textile yarns into rope yarns, rope yarns into strands, and strands into ropes.