A rope is a bundle of flexible fibers twisted or braided together to increase its overall length and tensile strength. The use of ropes for hunting, carrying, lifting, and climbing dates back to prehistoric times. Ropes were originally made by hand using natural fibers. Modern ropes are made by machines and utilize many newer synthetic materials to give them improved strength, lighter weight, and better resistance to rotting. More than half of the rope manufactured today is used in the fishing and maritime industries.

Although the origin of rope is unknown, the Egyptians were the first people to develop special tools to make rope. Egyptian rope dates back to 4000 to 3500 B.C. and was generally made of water reed fibers. Other Egyptian rope was made from the fibers of date palms, flax, grass, papyrus, leather, or camel hair. The use of such ropes pulled by thousands of slaves allowed the Egyptians to move the heavy stones required to build the pyramids. By about 2800 B.C., rope made of hemp fibers was in use in China. Rope and the craft of rope making spread throughout Asia, India, and Europe over the next several thousand years. By the fourth century, rope making in India had become so specialized that some makers produced rope intended only for use with elephants. Leonardo da Vinci (1452-1519) drew sketches of a concept for a ropemaking machine, and by the late 1700s several working machines had been built and patented. Rope continued to be made from natural fibers until the 1950s when synthetic materials such as nylon became popular. Despite the changes in materials and technology, rope making today remains little changed since the time of the ancient Egyptians.

Ropes may be made either from natural fibers, which have been processed to allow them to be easily formed into yarn or from synthetic materials, which have been spun into fibers or extruded into long filaments. 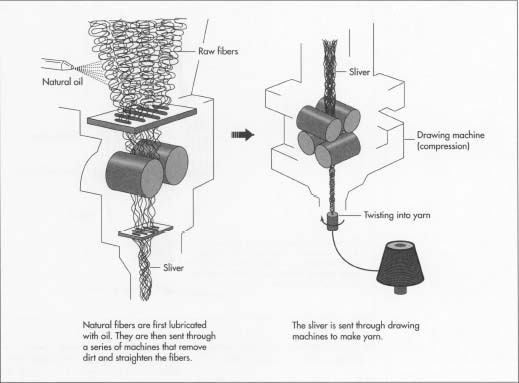 Synthetic fibers include nylon, polyester, polypropylene, and aramid. Polypropylene costs the least, floats on water, and does not stretch appreciably. For these reasons, it makes a good water ski tow rope. Nylon is moderately expensive, fairly strong, and has quite a bit of stretch. It makes a good mooring and docking line for boats because of its ability to give slightly, yet hold.